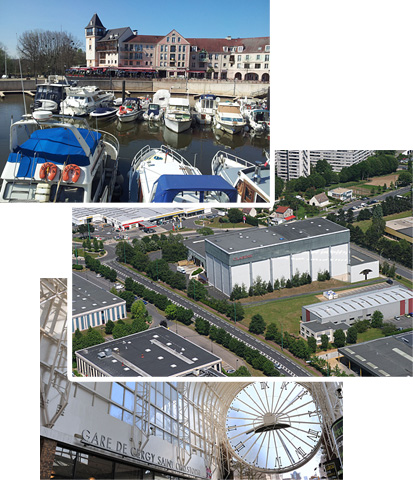 Cergy-Pontoise was built on a territory approximately the size of Paris beginning in 1969, and within a generation has become a true city (200,000 residents) equipped with all of the facilities necessary to the well-being of those who live and work there. Over 4,000 companies provide 90,000 jobs for an approximately equivalent size active population.

Cergy-Pontoise, located 30 km from Paris, has the major communication routes needed for its development. Three SNCF railway lines as well as the A and C RER suburban train lines place Cergy-Pontoise 20 minutes away from La Défense and 35 minutes away from Paris (Opéra). The A15 and A86 motorways place Cergy-Pontoise 20 minutes by car from La Défense. The La Francilienne motorway makes the Roissy Charles-de-Gaulle airport easily accessible. The "Express Bus" line connecting Cergy-Pontoise to the Charles-de-Gaulle Airport and its integrated TGV high speed railway station by this motorway route (40 minutes) provides new prospects for the active population living in the New Urban Area. These rapid links place Cergy-Pontoise at the centre of the Ile-de-France region's northwest quarter development.

Creating the Cergy-Pontoise University in 1991, which accommodates 13,000 students, as well as the 11,000 additional students enrolled in grandes écoles ( ESSEC , ENSEA , EISTI , ITIN , Institut Polytechnique Saint-Louis ) all show - as if more proof were needed – the will shared by all development actors in the New Municipality to provide itself with the necessary assets for its expansion.