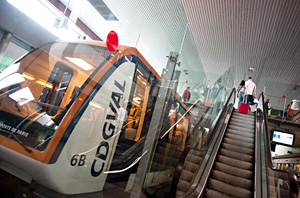 The Val d'Oise departement (French County), created when the Paris Region was divided up in 1967, quickly asserted itself as a dynamic department. Its 1.2 million residents, the City of CERGY-PONTOISE'S nearly 200,000 residents, and 32 towns with over 10,000 residents all give the department a two-fold aspect:an urbanised area along its entire southern fringe, from the Argenteuil - Bezons district through the southeastern municipalities (Sarcelles, Gonesse , Garges-lès-Gonesse ),

The Val d'Oise department, located in the North and Northwest periphery of the Paris urban area, truly enjoys a privileged location as both "gateway" to the Paris metropolis, and as an area open to Northern Europe (Great Britain, Belgium, the Netherlands, etc.).

Its international character is strengthened by the presence of the ROISSY CHARLES-DE-GAULLE Airport on its territory, with an integrated TGV high speed train railway station providing remarkable connections for plane and train passengers.